The Heritage of 137 Pillars House

Our original teak homestead is rich with a history of welcoming foreigners in Thailand who have made it their home. As with many of the most important Thai tales, this one starts in the royal court.

King Chulalongkorn, best known to foreigners as the royal student of Anna Leononwens, the British teacher in the royal Thai court, signed the Treaty of Chiang Mai in 1883. This royal decree permitted foreigners like the British men of the Borneo Company to cut trees across the vast teak forests of northern Thailand for commercial purposes.

For those first Europeans to settle here, Chiang Mai in the 1880’s offered glory and hardship in equal measure. By royal decree, foreigners lived on the opposite side of the Ping River from the Thai people whom they called “Siamese.” In the early years, foreign wives were not allowed to settle up north. The men who rode elephants into the jungle then returned to ‘civilized’ society with tennis, squash and polo. Anna’s son Louis Leonowens joined the Borneo Company in 1886, opening its Chiang Mai office in 1889.

During Louis’ tenure as Superintendent for the Company in Chiang Mai, he opened the Company’s office along the Ping River on January 24, 1896. Three sprawling Teak houses, each with more than 100 teak pillars were placed or built on this site and a fourth, 137 Pillars House as we now know it, was moved over from the west side of the river to the Company’s land in the foreigner’s enclave and he briefly lived here. The house served as residence of the Company manager until 1927, though it remained part of Company headquarters until World War II. The Japanese invaded Thailand in December 1941 and commandeered all the Company’s Chiang Mai assets including this house. Most of the Company’s Chiang Mai staff escaped to freedom by walking to Burma.

In the post WWII years, the Company returned to North Thailand but sold its Chiang Mai headquarters to William Bain, a Scotsman educated at Harrow who at age 23 had fled his family’s expectation for Chiang Mai where he joined the Company. William married a local Mon girl, and together they raised a family of two daughters and two sons. Son Jack followed in his father’s footsteps by joining the company and raising his own family on these grounds.

For more information and reservations, please contact 137 Pillars House on: 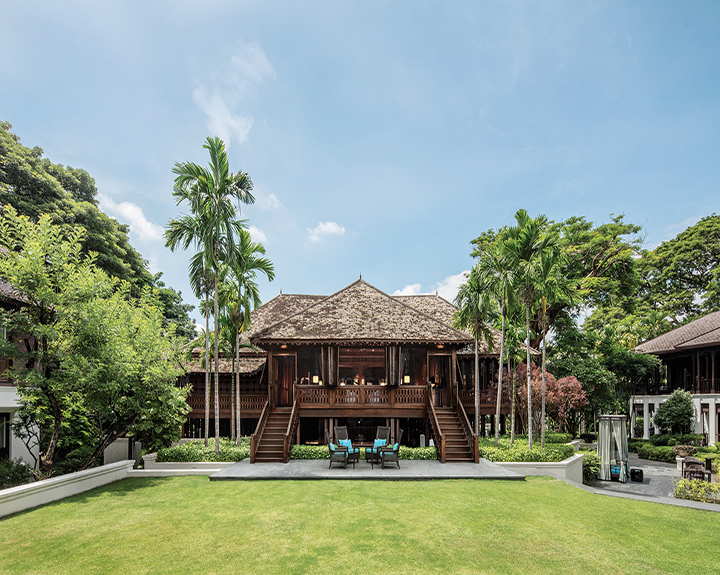